How to Smoke Hash 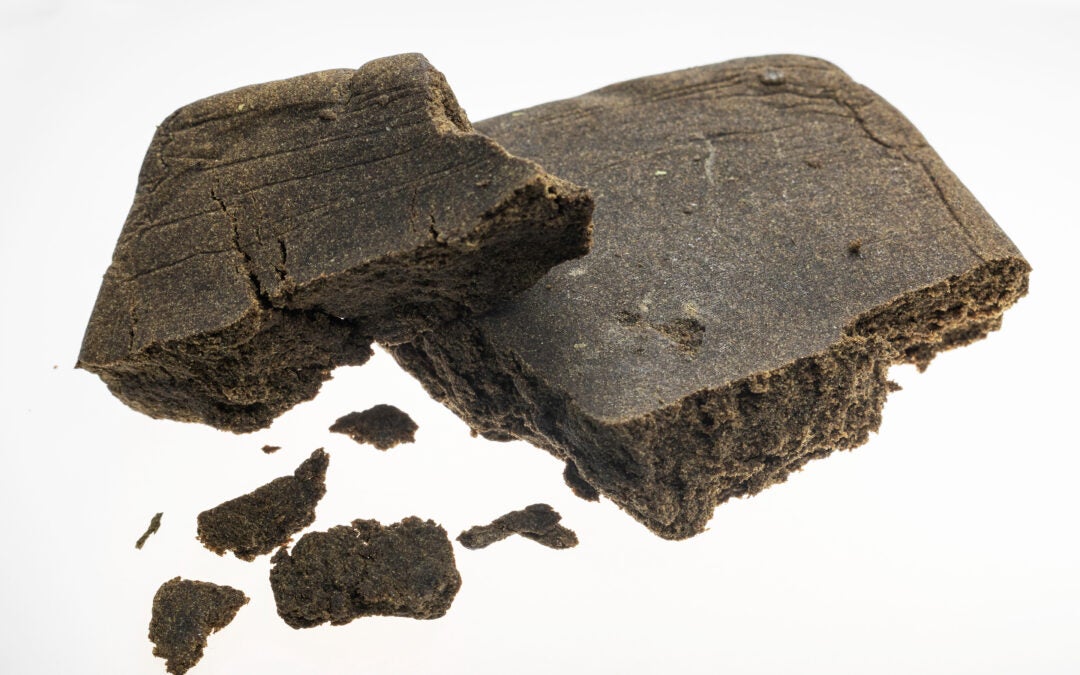 If you’re searching for a different way to enjoy cannabis, you may have come across “hash” or “hashish.” Hash is a popular concentrated form of cannabis commonly used in North Africa, Europe, and Arabic parts of the world. Hash is one of the oldest cannabis concentrates around, and it predates newer concentrates like shatter or wax by centuries. Its mellow high has made it increasingly popular with cannabis users throughout North America. It’s also very easy to use, and in this article, we’ll show you how to smoke hash in many different ways.

With so many options at your fingertips, you might find hash to be a welcome addition to your weed stash.

Hash is a form of cannabis concentrate that’s extremely popular in the Arab world.

Hash is made from the resinous trichomes of the cannabis plant- the delicate, crystalline structures that cover the buds and leaves like frosting.

The trichomes act as a defence mechanism, protecting the cannabis plant from hungry insects and animals, who avoid it due to the trichome’s bitter taste. They even have antifungal properties.

These trichomes are collected and pressed together- either by hand or a hash press- to make solid hash, which crumbles or softens when you apply pressure or heat.

By concentrating these trichomes, hash provides a potent high that is often much stronger than traditional cannabis because the trichomes are responsible for all the good stuff in cannabis, producing the cannabinoids (which include THC and CBD) as well as the terpenes and flavonoids that give cannabis its vast array of aromas and flavours.

Whether you’re an experienced cannabis user or a novice, there are plenty of smoking options available if you want to enjoy hash. Choosing a method of smoking hash that suits your preferences is the best way to enjoy this concentrated form of cannabis.

While many people smoke hash by itself, it’s most popularly consumed along with traditional weed flower as well.

Because hash is a concentrate, it’s best to avoid smoking large quantities if you’re new to it. Using small amounts of hash with tobacco or flower can help you enjoy smoking it without going overboard.

There are many excellent options for smoking hash to choose from. We explore some of the most popular methods in more detail below.

Hash in a Joint

If you enjoy rolling and smoking joints, you’ll be pleased to know that many cannabis users add hash to their joints. However, if you’re going to smoke hash in your joint, you’ll still need to use cannabis flower or tobacco to fill the joint.

First off, you might want to heat your hash beforehand- this softens it and makes it easy to spread.

Start by grinding your cannabis and placing it at the center of your rolling paper. You can also add tobacco if you prefer to smoke spliffs. Next, apply the hash across the full length of the joint to ensure that you get an even amount of hash throughout.

Alternatively, you can roll the hash into a single long piece that resembles a snake. Once you have that long piece prepared, you can lay it on top of the flower and begin rolling the joint.

If you do choose to smoke hash in a joint, you won’t notice much difference in the taste, especially if you’re smoking it with cannabis. That said, smoking hash in a joint can give you a much more enjoyable high. Make sure to start with a small amount if it’s your first time adding hash to a joint. You can buy pre-rolls with hash by Moonrocks. 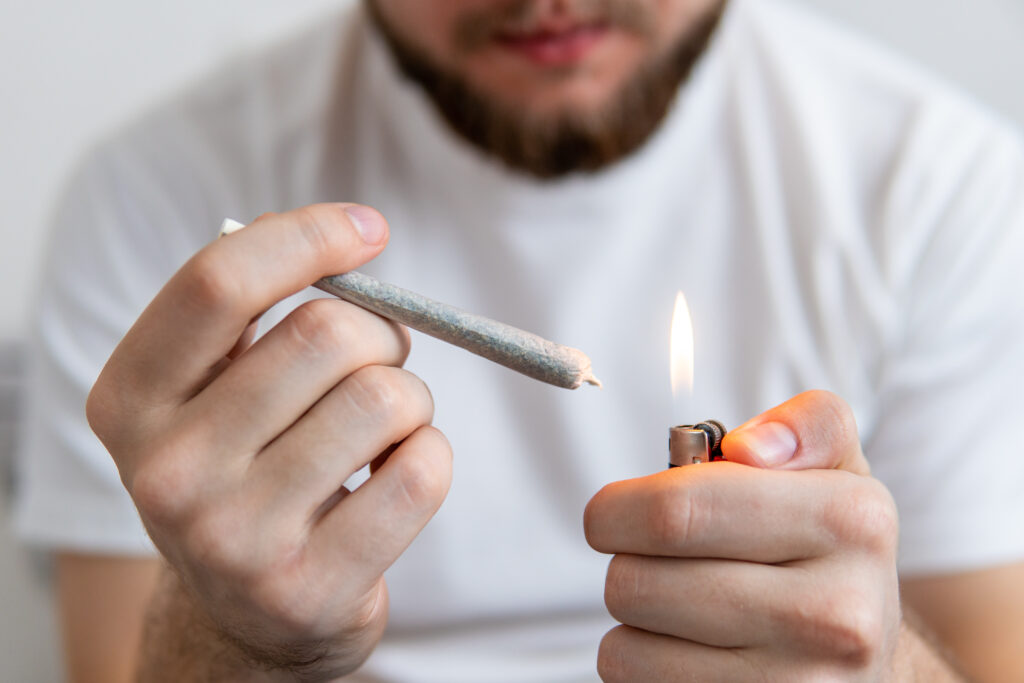 How to Smoke Hash in a Pipe or Bong

If you’re new to smoking hash, using a bong or pipe is one of the most accessible and affordable options. While bong prices can be high, especially if you go for something fancy, you won’t need to break the bank to purchase a basic pipe for smoking hash.

If you’re wondering how to smoke hash in a bong or pipe, the process is no different from smoking traditional cannabis flower. You can simply smoke the hash directly from the bowl, although most smokers will lay down a light bed of flower before adding the hash on top for a better burn.

If you plan on smoking hash without flower, it’s best to use a screen and break the hash into finer pieces before loading it into the bowl. If the hash isn’t broken up, it’s harder to burn and can clog your bowl.

Before you can break up your hash, you need to prime it. Start by placing your hash in a spoon and applying a flame to the bottom. It should quickly begin to fall apart, allowing you to then sprinkle the crumbled hash over your cannabis flower of choice.

If you plan on smoking hash with cannabis flower, we recommend you break up the hash and sprinkle it on top of the flower, as it’s best to use flower as the base of your bowl. Alternatively, you can mix the flower and the hash together for a more even smoke.

Smoking hash with flower in a bong or pipe can often improve the experience, and it’s a great way to use it if you don’t have the time, tools, or know-how to roll it into a joint.

If you want to buy some high-quality cannabis the next time you smoke hash, be sure to check out our options here.

Vaping is an increasingly popular way to consume cannabis. For cannabis users who don’t enjoy the taste or smell of smoke, vaping cannabis is an excellent alternative. Fortunately, you can vape hash using many of the top vaping products on the market.

While you can often smoke hash in traditional flower vaporizers, there are now concentrate-specific vaporizers that make the process much easier. When using the latter, you’ll need to ensure the vaporizer is at an adequate temperature for your hash. This can vary depending on the quality of the hash you’re vaping, so it’s important to experiment with each batch to determine the right balance.

If you do decide to vape hash, keep in mind that it will create buildup in your vaporizer. Because hash is a resin, it will stick to the inner components of your vaporizer. This will require you to clean your vaporizer regularly to keep it in working order.

Additionally, make sure to read your vaporizer’s manual if you’re going to use it for smoking hash. Most modern vaporizers include specific instructions about smoking concentrates, as well as the correct cleaning methods for maintaining top performance.

Can You Dab Hash?

Dabbing is another popular form of cannabis consumption among individuals searching for a potent high. Fortunately, if you enjoy dabbing concentrates, hash is no different from wax, shatter, and other concentrated forms of cannabis.

If you have a dab rig, you’ll need to place a small ball of hash on the dab tool. Next, begin heating the nail using a blow torch. Once the nail is heated, touch the hash to the nail, cover the resulting vapour with a vapour dome, and then inhale the vapour before it escapes.

You smoke hash in the same way that you smoke any other concentrate on a dab rig.

If you’ve never used a dab rig before, just follow the manufacturer’s instructions to ensure you’re using it properly. You can also read our article on how to smoke shatter, which is the same process. 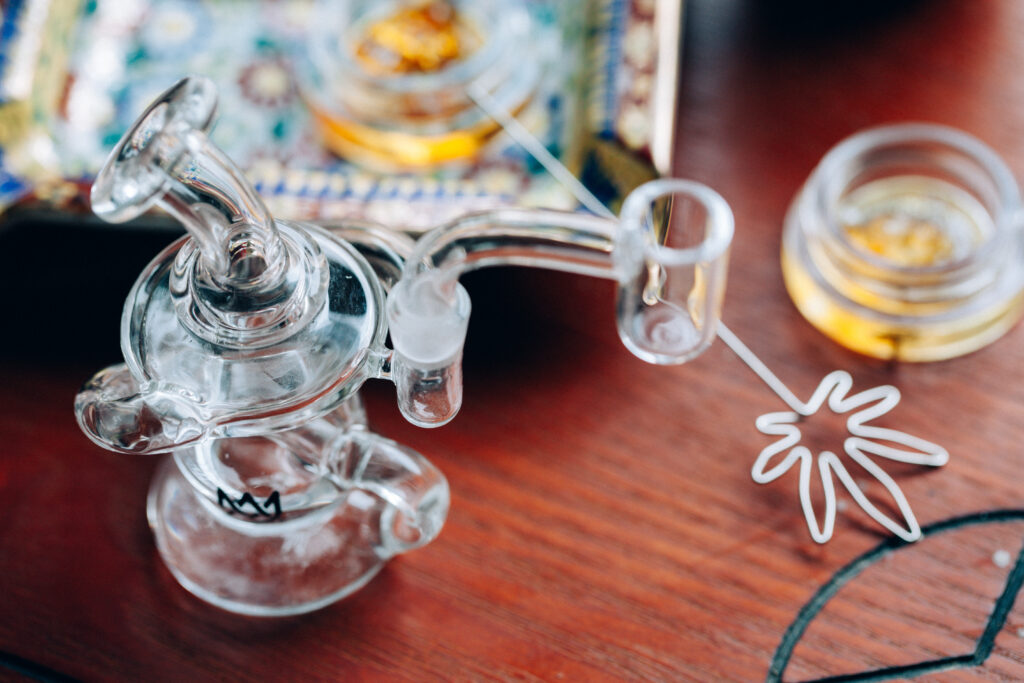 If you have any additional questions about how to smoke hash, check out the FAQ below, where we’ve compiled some of the most common queries we receive about smoking this classic cannabis concentrate:

Can I Smoke a Hash Joint by Itself?

No. Many people make the mistake of loading joints with hash and nothing else. If you want to smoke hash in a joint, you must mix it with cannabis or tobacco. On the other hand, if you soften or crumble it first, you can smoke hash by itself in a bong or pipe.

What is the Best Way to Smoke Hash?

The best way to smoke hash is entirely dependent on your preferences. Because you can smoke hash using almost any type of smoking method or accessory, it’s best to choose the option that you enjoy the most. If you already smoke cannabis flower using a specific accessory, simply add hash to the mix.

Yes. As hash is a concentrated form of marijuana, it’s much more potent than smoking traditional weed flower.

The concentration of THC in hash is significantly higher than that of regular marijuana.

That’s why it’s important to start with small doses if you’re inexperienced.

Do I Need a Special Hash Pipe?

No. You do not need a special hash pipe. Traditional cannabis pipes allow you to smoke hash easily. The best way to smoke hash using a pipe or a bong is to use flower at the base of the bowl, then sprinkle the hash on top.

Can I Buy Hash?

Yes. You can now purchase hash in most areas where it is legal. The legalization of cannabis has made it much easier to get your hands on this potent resin.

To try any of the ways to smoke hash outlined in this article, feel free to explore the various hash products on our website. We also have traditional cannabis, vape pens, accessories, and more.

Leafly: What is Hash?.