How to Smoke Shatter – 4 Easy Ways 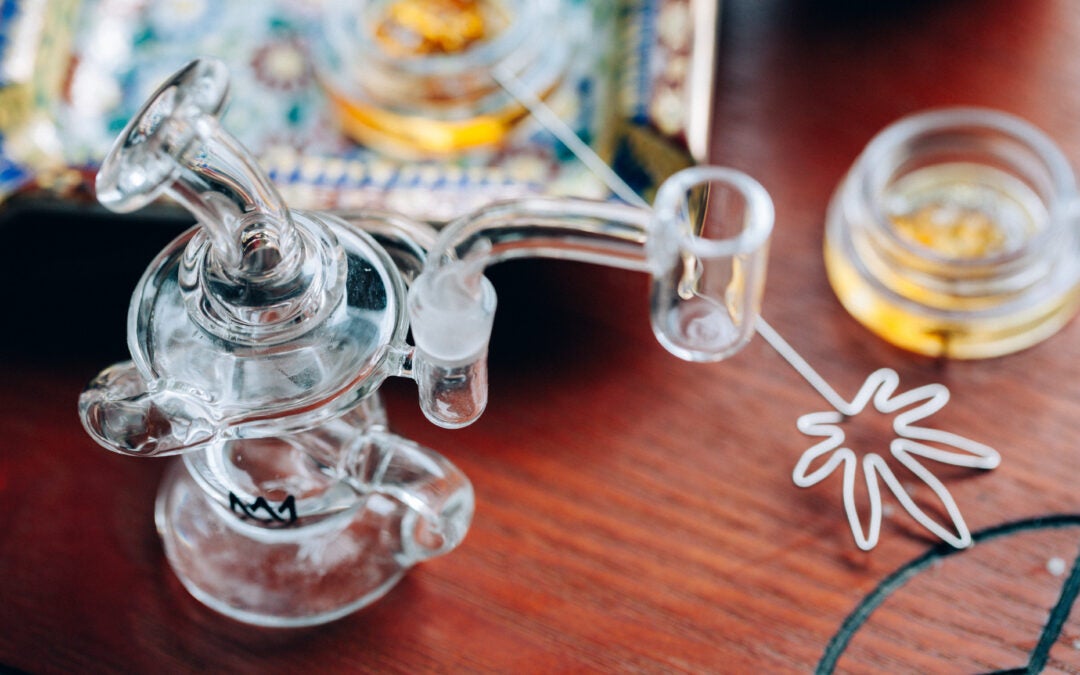 Did you know it usually takes around seven grams of dried flower to make one gram of shatter?

There’s no way around the fact that shatter packs a potent punch— the highest quality can have THC potency as high as 90%! Depending on your age, you may have heard the phrase ‘if it doesn’t shatter, it doesn’t matter’ as it gained prominence back in the early 2010s. A lot has changed since then, but it’s still popular by any standard, and in this article, we’ll learn all the ins-and-outs of this wonderful cannabis concentrate and how to smoke shatter.

Generally, it takes seven grams of dried flower to make one gram of shatter.

So not only does shatter give you a concentrated dose of cannabinoids, it concentrates the flavours, too.

Shatter is one of many potent cannabis concentrates on the market. It’s named after its brittle, glass-like consistency. It’s easily broken and can even be snapped apart like peanut brittle! It’s usually a translucent yellow or amber colour, and its consistency and colour can sometimes vary due to its cannabinoid profile.

Shatter is extracted from cannabis plants using a solvent and requires multiple purging cycles to properly remove all of the solvent used.

Typically, it’s smoked in a dab rig, but that’s not the only way. (For more information about its history, click here).

Here are a few more ways how to smoke shatter.

How to smoke shatter without a rig

Adding some shatter into a joint is one of the easiest ways to smoke this cannabis concentrate. Plus, it’s a straightforward method for anyone who can roll.

Here’s how to smoke shatter in a joint.

A positive of joints is that you don’t need much money or equipment. There are more efficient ways of using shatter, but in terms of ease and accessibility, a joint is the best way to try it. 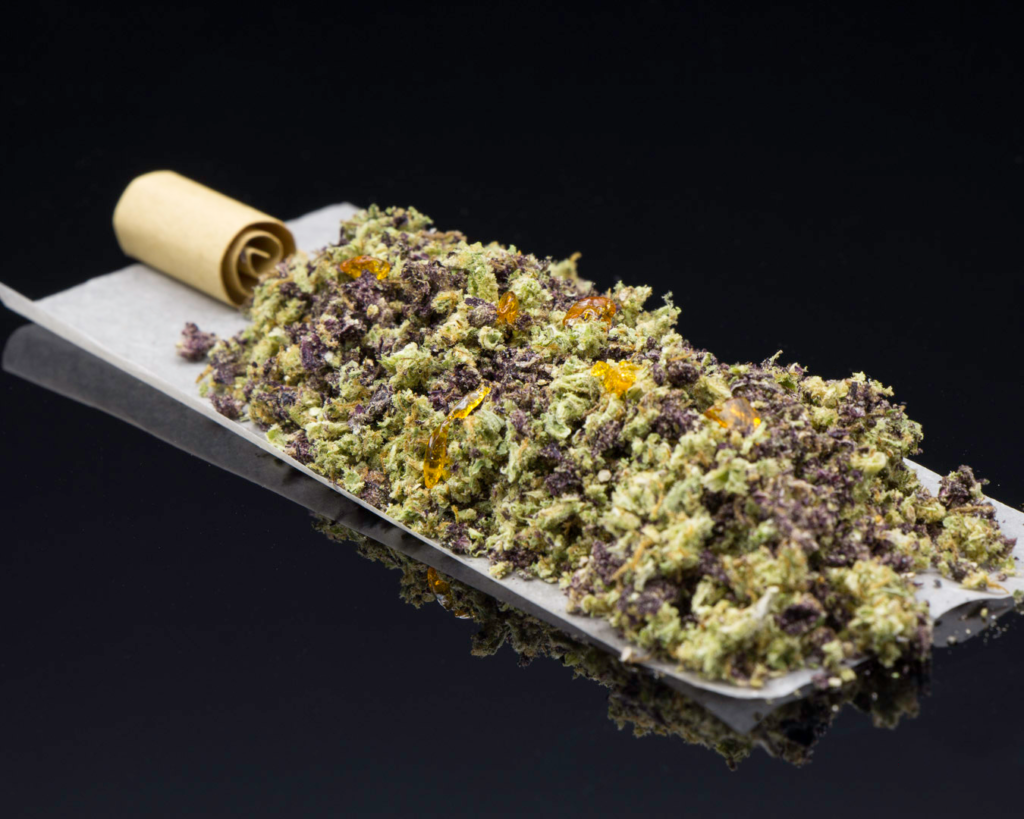 How to Smoke shatter in a pipe or bong

Want to learn another simple method of smoking shatter? Then consider getting a bong or a pipe! They’re easy to find and usually are more affordable than dab rigs because they don’t require as many accessories.

With dabbing, you need the dab nail, ‘dabber’, carb cap, and dab torch. A pipe is its own accessory and the only accessories you need for bongs are the bong itself and a bowl, although screens can be nice, too.

Before loading your bowl, we recommend putting a screen in first. The next step is grind up a bit of cannabis flower and add some to the bowl.

Then, sprinkle on some smaller pieces of the broken concentrate.

The last thing is to top it all off with a bit more cannabis because the plant material makes for a better burn and smoke.

Many people add ground cannabis to their shatter to avoid direct contact between the flame and concentrate because the flame is so hot that it can affect the taste. It would be doubly disappointing if you were to buy shatter for the first time only to burn it

How to Dab Shatter

Dabbing shatter is the process of using a dab rig. It may be the most expensive and involved way to consume cannabis concentrates, but it’s also the most efficient, too. Since the heat you dab at isn’t as hot as burning it, you retain a lot of the more sensitive terpenes and cannabinoids.

Therefore, you get a greater range of flavours which is not possible with the other methods listed above.

While a rig kind of looks like a bong, the big difference between them is that a dab rig has a dome and a nail instead of the standard bowl.

You can find titanium, quart, and ceramic nails, and each type has their fans.

How to Dab Shatter

The combination of these components makes using a rig more complicated than a joint or bong, but if you take the time, you’ll soon find that using a rig isn’t too hard.

This process may vary depending on your setup, but it works for most. The intensity of the dab depends on the amount of shatter you used.

We recommend starting with a small amount and slowly increasing the amount as you go because it’s so concentrated, it’s easy to place to do too much. If you don’t feel it, you can always take more dabs.

Even experienced cannabis users should start slow if they are using a dab rig for the first time because the intensity can be so much higher. The punch can surprise even experienced users – especially due to shatter’s high THC levels.

The effects of shatter will hit you almost immediately, and can be very long-lasting as well.

How to Smoke Shatter with a Vape Pen

Vape pens are another great method for using shatter and they cost between $30 to $200. The price depends on the quality of the materials and features. If you want durability, then you’ll need to spend extra money.

The obvious advantage of portable vape pens is that you can take them with you anywhere.

Another advantage is that you don’t have to sacrifice flavour. There is also no combustion because the heat is lower, so there’s no risk of burning it.

Health is another reason to opt for vaping as it lacks the tar and carcinogens of when you smoke shatter, minimizing the impact on your health.

Using a vape pen is simple and can be broken down into four steps:

There are also disposable pens available that are even easier to use!

It’s natural to have questions before trying shatter for the first time. Get clued in about all things shatter so you can have a great experience with this super-potent form of cannabis.

Can you eat it?

Eating shatter is not recommended because it’s a waste that won’t even get you high. In order to get the effects, the compounds in cannabis need to be activated through a process called decarboxylation- this is why we burn or vaporize it.

Without decarboxylation, the THC that gets you high remains inactive and won’t have any effects. This is the same reason why eating flower (or most other concentrates) on its own won’t do anything, either.

What’s the best method to use shatter?

After reading the different ways of smoking shatter, you may find that one speaks to you. If not, then you could try each method to see which one is the best for you. Ask your friends if any of them have the equipment for smoking concentrates mentioned in this article.

Each smoking method has its advantages and disadvantages. Through experience, you can pick the one that gives you the most enjoyment.

Is there a difference between shatter and wax?

There are a few critical differences between these cannabis concentrates that can help you make the right choice.

Shatter is more stable, so it lasts longer, but it’s also harder to measure out correctly because of its glass-like structure.

Therefore, you may struggle to get the precise hit you’re after. With wax, that’s not the case. The oily consistency of wax makes it much easier to scoop out what you need.

Wax also has more flavour and taste than shatter, which sacrifices flavour for more THC for a stronger hit. 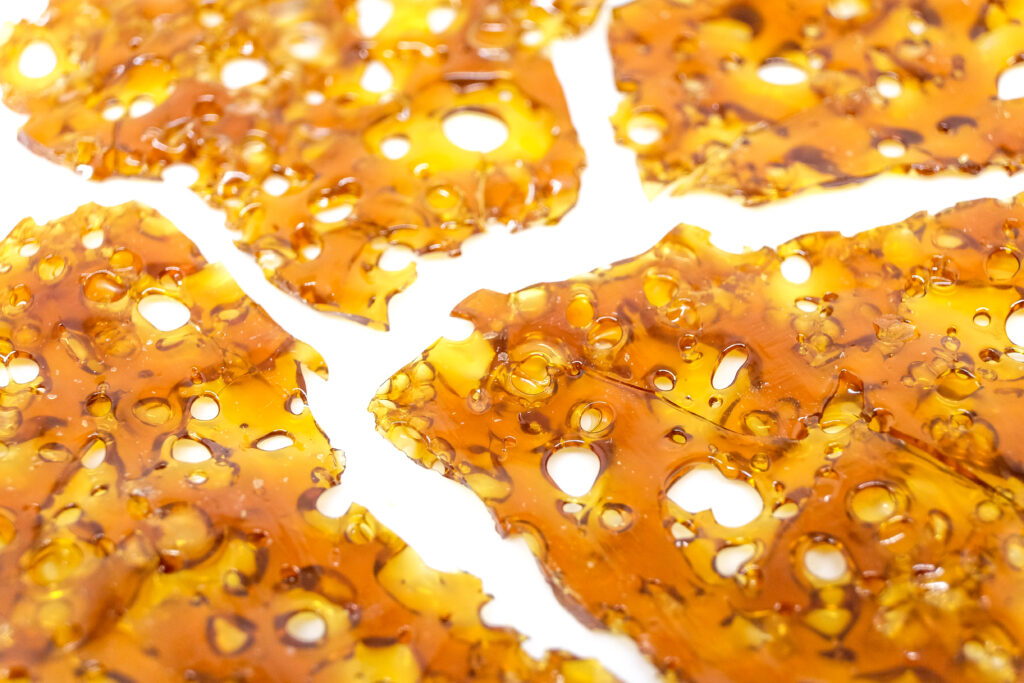 Is it safe to smoke shatter?

Quality shatter is safe if you consume it reasonably and avoid driving or operating heavy machinery. Start with very small quantities to see how much you can handle. Work your way up slowly instead of making big jumps.

While shatter is often extracted using butane as a solvent, it is purged multiple times before being ready for consumers.

Does vaping shatter cause a bad smell?

You might already know the distinctive smell of cannabis. It’s not for everybody.

Vaping shatter doesn’t have the pungent aroma of weed smoke, and since it’s a vapor, it doesn’t hang around in the air for very long, either. While you might get a faint whiff of cannabis when vaping, it’s nowhere near as strong as weed smoke, which makes vaping ideal if you’re inside or around people who don’t like the smell of weed.

Many other cannabis concentrates are similar in that they don’t smell as much as smoking weed.

How much shatter should I consume?

The amount of shatter you should consume depends on your tolerance level and the strength of the hit. More shatter leads to a stronger hit, so be careful about how much you add. Consider starting with a small amount and building up to more shatter to avoid getting an intense hit that you cannot handle.

Is there CBD in shatter?

Not really, unless you’re specifically getting CBD shatter. But it’s harder to find because it isn’t as common.

How much does a gram of shatter cost?

The cost depends on where you buy, so you’ll need to shop around to get a deal that appeals to you.

On the cheaper side, expect to pay around $3o and up, but if you’re looking for quality, it can go up to $50 for a gram. Check out our website for quality shatter at a price that you’ll struggle to find elsewhere.

Check out our great selection of shatter here. For more information on shatter and learn how it’s made, check out this article here.

Also, make sure to check out all the other cannabis concentrates and extracts on our menu like live resin, cannabis oil, budder, and so much more!

Shipping to
BC
Change